A Little Risk Can Go a Long Way in Retirement 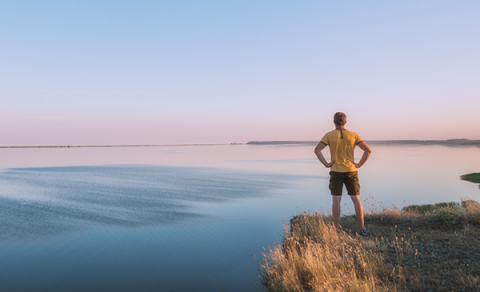 Have you ever wondered if you truly have enough money for retirement?

You’ve hopefully been putting money aside for your retirement for decades now, and ideally, you’ve been able to increase your contributions over the years.

This hard work has given you a substantial nest egg, but you’re still worried that you’re at risk of running out of money during your retirement years.

Most people need to do more than just contribute to their retirement accounts; they also need to invest their contributions in order to try to accumulate enough money to fund a comfortable and secure life in retirement.

But as you get close to retirement, you may fear a market decline that could put your retirement assets—and future plans—at risk. Mitigating this risk is a critical part of retirement investing, and you may find that you don’t have to take as much risk as you think.

That was the lesson one investor learned when he met with an advisor to talk about his retirement plans.

John hoped to retire in the next few years, but he wasn’t sure if he’d accumulated enough money to cover his expenses in retirement.

At first glance, he seemed to be in good shape. He’d been aggressively saving for his retirement years, and he’d put aside $1.5 million in his retirement accounts. And he was still adding a few thousand dollars to his account every month.

When it came to investing, however, he was extremely conservative, and his retirement assets were entirely in cash. He’d been burned in previous bear markets, and he’d steered clear of the markets ever since.

This was consistent with his low risk tolerance, but it wasn’t in line with his retirement goals. If he stayed in cash, he was likely to run out of money in retirement, given his expected withdrawal rate and life expectancy. Maybe you've had a similar experience.

Two ways to improve the chances of success

There were two ways that John could improve his chances of success.

1. He could reduce his spending and try to get by on less money.

This didn't appeal to John: he'd been putting money away so he could keep his same quality of life in retirement. He didn’t want to have to move into a smaller house or relocate to an area of the country where his money might last longer.

2. Alternatively, he could take a little more risk and invest his retirement assets more productively.

Because John had saved a sizable amount of money, he didn't have to take a lot of risk. In fact, he didn’t even have to take any stock market risk. If he simply shifted from cash to bonds, he’d be much more likely to be able to maintain his current lifestyle throughout his retirement years.

Changing our investments isn't easy, and it wasn’t easy for John. He was still scarred by his previous investing experiences, and like many investors, he was nervous about bonds.

And yet, he also really valued the life he'd made for himself.

So, he came to terms with investing in bond funds, and he’s looking into strategies like our Flexible Income approach that are designed to adapt to changing bond markets.

Planning for a long, secure life in retirement includes mitigating risk as well as making sure that you try to earn enough to reach your goals. After all, you don’t want to just get by in retirement, you want to live the life you deserve and finish retirement with money left over.

If you aren't sure how much risk you need to take to have the life you want in retirement, then it may be time to work with an advisor. Click below and let's see if we're a good fit.