What You Should Know About Rising Interest Rates 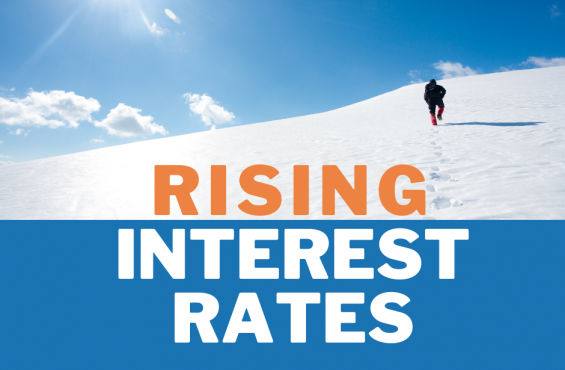 Interest rates jumped this year, even before the Federal Reserve’s first planned increase to the federal funds rate, the short-term benchmark interest rate, later this month.

Fed Chairman Jerome Powell confirmed on Wednesday March 2nd that policymakers still planned to raise rates and would do so carefully given the economic uncertainties around the Russian invasion of Ukraine.

What do rising rates mean for investors, and what should investors expect in this environment? Here’s what you should know:

It’s not unusual to see longer-term rates, like the 10-year Treasury yield, rise before the Fed takes action.

Schwab found that in “12 of the past 14 Fed rate-hike cycles, 10-year Treasury yields were higher in the months preceding the first hike and continued higher for at least two months on average before flattening out. But in most of those cases, longer-term yields resumed their rise well into the tightening cycle—consistent with ongoing economic growth.”

Higher interest rates will eventually result in better returns for bond investors–a welcome change from the dismal yields in 2021. However, rising rate environments are usually volatile, as we’ve seen this year so far.

Should you own bonds when interest rates are rising?

Interest rates and bonds have an inverse relationship: when rates rise, bond prices fall (more on that in a minute), but some bonds typically hold up better than others when rates change. So it’s still worth owning bonds when rates are on the rise (especially since bonds can still help buffer volatile periods in the stock market), but you may want to consider what kinds of bonds you own.

Government bonds are more interest-rate sensitive (the Bloomberg US Aggregate Bond Index, which is considered a proxy for the overall bond market, has about 40% in government bonds.) Long-term bonds that don’t mature for 10 to 25 years are also more sensitive to interest rates than short- or intermediate-term bonds.

Other areas of the fixed income markets may be better able to weather changing yields. Lower quality high-yield bond funds, for instance, may be useful if rates increase gradually because the higher yields of these funds could help compensate for falling bond prices. Foreign bonds may behave differently from those in the US, and not all countries are raising rates. Floating-rate funds own bank loans whose interest change as rates change. Keep in mind that high-yield, foreign, and floating-rate funds can be risky, so talk to your advisor to see if these investments are appropriate for you.

Why do bond prices fall when interest rates rise?

Here’s a simple example: Imagine you own an individual bond with a face value of $1,000 that pays 3% interest ($30 each year). If interest rates rise, a bond of similar quality might pay 4%, or $40 per year.

Now that rates are higher, your bond paying $30 doesn’t look as attractive, so if you wanted to sell your bond, you would have to lower the price to attract a buyer. If your $1,000 bond matures in a year, it may sell for only $990.

How do stocks perform when interest rates are rising?

Stocks have usually done fairly well during initial rate increases, Schwab found that the S&P 500 historically performed better when rates rose gradually versus rapidly. LPL Financial found that stocks often have gained in the months after an initial rate hike and, on average, stocks have been up during extended rate hike cycles.

Higher yields are generally assumed to be a bigger hurdle for growth stocks, like technology companies, and that’s been true recently: in this year’s correction and the September 2021 pullback, growth stocks fell when rates rose. But this isn’t always the case: growth was in favor in 2017 (and tech was the best performing sector), a period when the fed funds rate doubled from 0.75% to 1.50%.

Value stocks, such as financials, stand to benefit from higher interest rates. However, during the rate hikes of 2004-2006, international stocks were the place to be.

How to invest in rising rate environments

There’s a lot of uncertainty about what will happen in the markets this year, but try to stay open to many possible outcomes and opportunities. Remember that rates are still historically low, higher rates may already be priced in, and rates aren’t the only driver of future stock and bond returns.

If you’re feeling overwhelmed, focus on what you can control: your plans to reach your goals, how much risk you’re taking, what you’re doing to try to manage this risk, and what resources are available to you.

You don’t have to manage this all yourself. FundX investment advisors can help you come up with an investment plan, adapt to changing market environments, and stay on track to reach your goals. Let’s talk and find out if you’re a good fit for us, and if we’re a good fit for you.