How to Avoid Retirement Regrets 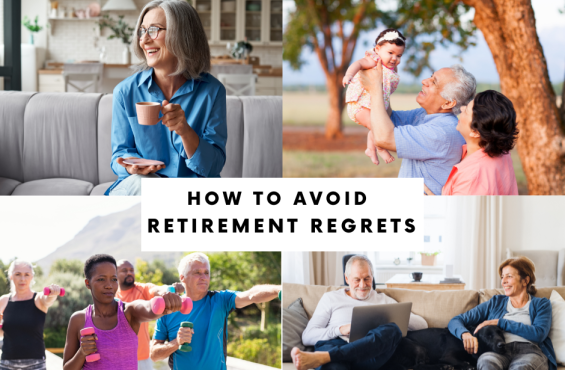 Retirement is considered the golden years: a time to travel, spend time with your friends and family, and leave your worries behind.

For a surprising number of retirees, however, retirement is also a time of regret.

The newly released Retirement Reflections survey by the independent Employee Benefit Research Institute (EBRI) found that about half of retirees look back on their financial decisions and wish they’d done things differently.

These retirees had done pretty well for themselves financially with an average nest egg of $522,000, and yet, 49% said that they’d be in better financial shape in retirement if they’d changed their financial habits while they were still working.

What retirees regret most

Retirement regret #1: Waited too long to save and invest

Most retirees (72%) wished they’d saved more for retirement and invested their savings earlier. Many people don’t get serious about retirement until later in life, but those who can start investing earlier often have a tremendous advantage—they have more time to let their investments grow, and that growth compounds over the years.

Retirees who had larger nest eggs were less likely to have regrets about their retirement plans, while nearly 60% of retirees who had saved less than $500,000 for retirement said they should have made some changes while they were still working.

Most retirees (55%) didn’t have a formal retirement plan in place. “I'm just winging it now,” one retiree reported.

A solid plan should give retirees clarity and confidence in their retirement years. It should help bring all the pieces together, so they have a better idea of what to expect and what to pay attention to. For instance, many retirees (48%) didn’t fully understand how taxes would affect their retirement savings, and some said their taxes in retirement were higher than they’d expected. A good plan should help you avoid these kinds of unpleasant surprises.

Retirement regret #3: Tried to do it all themselves

Most retirees in this survey made the transition into retirement on their own. Those who got professional financial advice from an investment adviser or financial planner, however, were less likely to have financial regrets, and they were overwhelmingly satisfied with the experience: 88% said that the benefits outweighed the cost.

These retirees reported that advisers helped them allocate their assets, understand their risk tolerance, and generate an income stream from their retirement accounts. More than 80% of retirees said that working with a financial professional helped them identify previously overlooked retirement needs.

Retirement, like most things in life, probably isn’t going to be perfect, but there are clearly things that investors can do now to improve their retirement plans and avoid painful regrets later.

If you are many years away from retirement, increasing your contributions to your retirement accounts and investing these contributions for growth could help you build the kind of wealth you’ll need to retire without regrets. Working with an adviser or a financial planner can help you determine how much to save in order to retire comfortably.

If you are nearing retirement or you’re in retirement, make sure you have a plan that helps you stay on track. Review your plans periodically to see if they’re still up to date. Most retirement planning assumes that you’ll make some changes along the way.

Here’s one thing to do to advance your retirement investing

Have an initial conversation with an adviser or a financial planner to see if a professional could help you develop or strengthen your retirement plans. (It’s easy–and free–to set up a time to talk with a FundX adviser.) It may be that you’re doing perfectly well on your own or, like many of the retirees in the survey, there may be a reason to work together to give you the retirement you deserve.