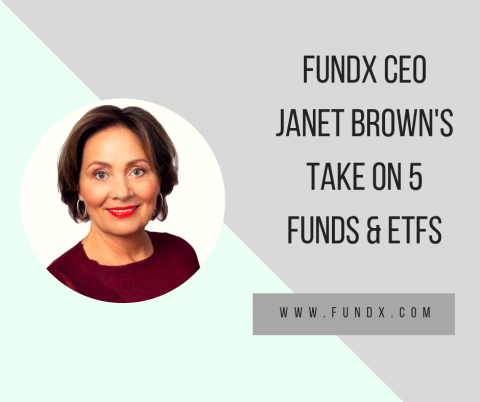 Is this a good time to own value funds? What about international ETFs?

On the MoneyLife Show with Chuck Jaffe, FundX CEO Janet Brown talked about what funds and ETFs are in favor now, and she answered listener questions about five stock and bond funds and ETFs.

When it comes to core growth funds, which tend to be diversified funds with market-level risk, there’s a mix of more defensive funds, like Invesco S&P Low Volatility (SPLV), and more aggressive funds, like Brown Advisory Sustainable Growth Fund (BIAWX), that are in favor now, Janet said.

What about other kinds of funds, like bond funds or dividend ETFs? Janet gave her take on five funds and ETFs that Money Life listeners were interested in.

1. Osterweis Strategic Income (OSTIX) - “This is a great bond fund. I not only would hold it, but I’d buy it,” Janet said.

2. Oakmark Fund (OAKMX) - “I love Oakmark fund and I’ve used it over the years when value funds are in favor.” But since this fund just isn’t in favor now, “I’d sell it,” Janet said. If you’re looking to buy a value fund, Janet pointed Weitz Value (WVALX) instead.

3. Cohen & Steers Preferred Securities and Income Fund (CPXAX) - “This is a good fund, but it’s a load fund ...If you already own it, I’d hold it, but I would never buy a load fund. There are plenty of other alternatives.”

5. GlobalX SuperDividend ETF (SDIV) - “This ETF has very lagging performance, and there are many better choices,” Janet said.

Nervous about the Market? Four Things to Do Now
Are Your Funds Riskier Than You Think?
What Younger People Should Know About Investing
Investing Through Life Transitions