Can Index Funds Make a Difference? 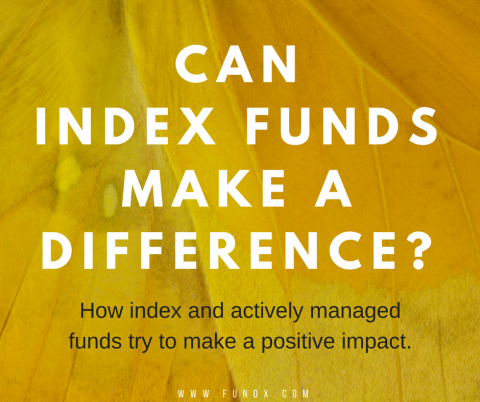 Where we invest and what companies we support has an impact on society as a whole, and funds can help investors use their money to make a positive impact.

Actively managed mutual funds have many ways to make a difference, including:

Many funds have used all or some of these tools for decades and made significant progress.

Index funds, however, have been an exception to this process. Index funds by design passively track a particular market index, so they can’t take action against a company that gets in trouble. For example, since Wells Fargo is in the S&P 500 Index, passive funds tracking the S&P 500 had no recourse when the bank admitted to illegally opening millions of fraudulent accounts and was fined $1 billion. Actively managed funds, on the other hand, could choose to sell Wells Fargo and move on to other bank stocks.

Index funds are often among a company’s largest investors, so the best way they can affect change is to vote on shareholder resolutions. But major index fund companies, like Vanguard or BlackRock (iShares), rarely vote on these proposals. And when they have voted, they usually supported the status quo and voted with management rather than pushing companies to do better.

Index funds are starting to step up

There are signs that index funds are starting to get more involved. In early 2020, BlackRock joined Climate Action 100+, and in a 2018 letter, BlackRock CEO Laurence D. Fink told S&P 500 companies that they needed to conduct business more responsibly. “To prosper over time, every company must not only deliver financial performance, but also show how it makes a positive contribution to society,” he wrote.

Some index fund providers are also beginning to vote for change. BlackRock, Vanguard, and State Street made the news in 2017 when, for the first time, they voted in favor of a resolution that required Exxon to report on the financial impact that climate change could have on the company.

Sustainable funds are designed to make a difference

It’s great to see that index fund providers are paying more attention to these issues, but it’s also worth remembering that actively managed funds, particularly sustainable or or ESG (environmental, social and governance) funds, have been doing this for years.

Sustainable funds have comprehensive strategies for making a difference in the world. They have strong voting records, and many funds go the extra mile to make an impact by engaging with a company’s managers in an attempt to help a company move forward.

And active funds have an additional tool: if their shareholder resolutions and engagement efforts aren’t effective, they can walk away and invest in other companies that they believe are better addressing important issues and risks.

An earlier version of this article originally appeared on ThinkAdvisor.