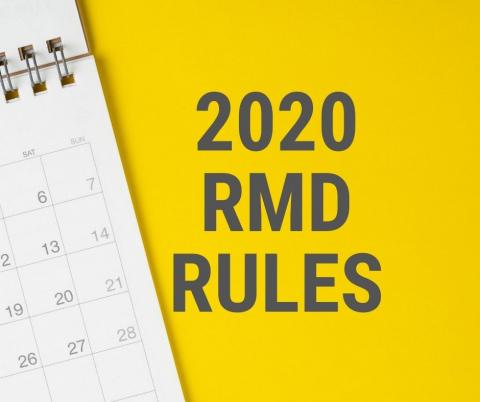 The rules about taking required minimum distributions (RMD) from your IRA keep changing in 2020, and it can be hard to keep up.

The IRS provided new ”rollover relief” guidance in late June, which made it possible for more retirees to return RMDs they’d taken earlier in the year.

So if you tried to return an RMD earlier this year and were rejected, it’s probably worth trying again, but you need to take action soon: three of these RMD rules expire August 31.

Here’s a quick review of the changes to RMDs in 2020 as of July 2020, including the June guidance from the IRS to help you stay in the know.

The CARES Act, the stimulus bill passed in March, waived RMDs in 2020. Normally, the IRS requires investors to take a specific amount out of their IRAs starting at age 72 (70½ before 2020) each year; this is known as a required minimum distribution or RMD.

When the CARES Act was passed, the stock market had plunged more than 30%, so “requiring distributions in 2020 would have essentially forced retirees to ‘sell low’ by pulling money out of their retirement account when the stock market is down significantly,” Kiplingers explained.

When the CARES Act first went into effect in March, the IRS only allowed account owners to return an RMD within 60 days of taking it (known as a 60-day rollover). So, if you’d taken a distribution in January 2020, you were past the 60-day window by the time the CARES Act suspended RMDs for the year.

Now, you have until August 31, 2020 to return an RMD, thanks to the IRS’s June guidance (known as Notice 2020-51). So reach out to your investment advisor or the financial institution that holds your retirement account (Charles Schwab, Fidelity, etc.) to get any necessary paperwork in place.

IRS Notice 2020-51 also allowed investors to make multiple rollovers in 2020 as long as they are completed by August 31. Previously, the IRS only allowed one 60-day rollover within 365 days.

“The temporary waiver of the once-per-year rule also solves the problem of clients who have multiple RMDs, i.e. some who were taking monthly RMDs and were only able to return one of them,” Financial Planning noted.

4. Beneficiaries can return RMDs (as long as you meet the Aug 31 deadline)

The June IRS guidance also permits beneficiaries to return an RMD to their inherited IRAs (beneficiaries were previously excluded).

Most expect that the new RMD rules will only last until August 31. At that time, “it’s likely that inherited account distributions will no longer be eligible for rollover, the 60 day rollover rule will once again kick in, and the once per 12  month IRA rule will also be back in effect. However, there will still be no RMD requirement for all of 2020,” Schwab noted.