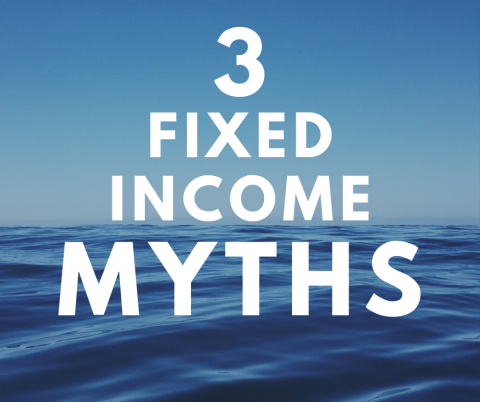 Are you avoiding bonds because you’re worried about interest rates or because you believe that bonds are only for retirees who need income?

These are common myths about fixed income investing that can really hold you back.

Are you making assumptions about bonds that are getting in the way of your investment success?

Here are three common misconceptions about bonds and the facts all investors should know.

When interest rates rise, bond prices fall, but some bonds typically hold up better than others. High-yield bonds, for instance, may do well if rates increase gradually because their higher yields can help compensate for falling bond prices, and global bonds may behave differently than U.S. bonds.

Interest rate changes are also hard to predict. Even though most expected rates to increase this year, rates have actually fallen. Th yield on the 10-year Treasury note ended June at 2.0%, a 38% drop since the 3.24% yield reached on November 8, 2018.

The worst-case scenario for interest rates also may not be as bad as you think. Several years back, Vanguard looked at what would happen to bonds, as measured by the Bloomberg Barclays Aggregate Bond Index, if rates suddenly rose from 2.1% to 5.1% (that’s a 143% jump in rates, something that has never actually occurred).

Vanguard found that bonds would lose around -13% in the first year, which is a substantial loss for bonds. But because the yield on bonds would now be higher, the expected return going forward would be around 5.1% annually, meaning the breakeven point would be just over three years. So even in this worst-case scenario, bonds held for several years still made money.

An investor told us recently that he’s never made money from bonds. While it’s entirely possible to lose money on bond funds (it all depends on what kind of bonds you own and over what period you’ve held them), it would be highly unusual to hold onto a bond fund for several years and not make money.

Bonds are up in 2019, so far, and the Bloomberg Barclays Aggregate Bond Index has been up in almost every calendar year back to 1976, a period which includes many periods of rising interest rates. It had losses in just three of the last 42 years.

And keep in mind that even if your bond positions were flat, if those investments helped to buffer your portfolio against stock market downturns and kept you invested in stocks long term, then owning bonds likely did help you make money—just not in the way you might have expected.

Myth #3: Bonds are only for people who need income

Some people assume they don’t need to own bond funds because they are not yet retired, and so they don’t need an income stream to live on. But the primary benefit of owning bond funds in your portfolio is the stabilizing effect they provide.

We believe there are better ways to produce cash for steady income than taking monthly or quarterly distributions in cash. But including a ballast against the volatility of the stock market is smart for most investors, and bonds are probably the best asset class to accomplish this.

This originally appeared on Forbes.

What Stock Investors Should Know about Bonds
How Bond Markets Could Change
Should You Reach for Higher Yields?
3 Reasons To Steer Clear Of Individual Bonds -- And Focus On Bond Funds Instead